So, I've got exciting news. After the LM Cast's performance on the View on th 10th of June, Hayley Kiyoko and Blake Michael has revealed that they (the cast) have...

A very special a big announcement to make!!

We don't know what it is, but they did say it on Twitter. So now you have to watch it! :D At least try to! And once you have, please share their announcement so everyone will know! Thanks! 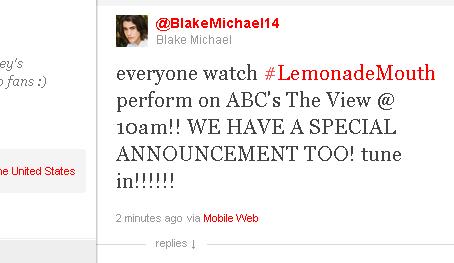 By the way, Blake tweeted this just 2 minutes before I made this blog xD

I don't know if you noticed, and I tried to get more of it, but Hayley's Twitter background is Lemonade Mouth! :D (And she tweeted this via iPhone :)

What do you think will the announcement be? A tour? I don't know! I hope it's a 2nd movie :D Not really hoping for a tour, though...I hope it's not a tour xD

and so does Lemonade Mouth!!

Retrieved from "https://disneyslemonademouth.fandom.com/wiki/User_blog:InSpeck/I_wonder...!?oldid=6574"
Community content is available under CC-BY-SA unless otherwise noted.